I am back with a new zero waste blog post now as an official Irish Climate Ambassador. As part of the programme, we committed to carry out climate actions and communications throughout the year. I am starting with a new series on water conservation - the first chapter is on toilets! In March 2020 my 3 flatmates and I saved 2025 litres of water in total by not flushing the toilet after every use.

If it’s yellow,
let it mellow.
If it’s brown,
flush it down

rule when using the toilet. It is just a simple thing, but we did not know its actual implication.

We were really curious about how much water we actually save with this method, so we decided to track our toilet flushes for a whole month. On a sheet of paper, we simply marked how many times we flushed and how many times we did not (see above).

But actually, March 2020 was kind of exceptional as we were forced to spent half of the month working from home due to the Coronavirus measures, so the data might not be suitable for making the extrapolation for the rest of the year. So, it looks like we’ll need another round of counting when things go back to normal again. Anyhow, I thought it is still interesting to share our estimate…

But let’s get back to the actual numbers. We flushed our toilet 137 times and marked 270 occasions when we did not (but would have in the past without the new rule in place). That means we saved a total of two-thirds of the water that we would ‘normally’ have used for flushing the toilet; really impressive I’d say.

Well, now where does that leave us? I wanted to check how this compares to the general water usage estimates in Ireland. According to Irish Water, it is estimated that we use on average 129 litres per day, of which 26% we used for flushing our toilets. So it would mean that people live in Ireland use 36.12 L water per day on average for flushing toilets. 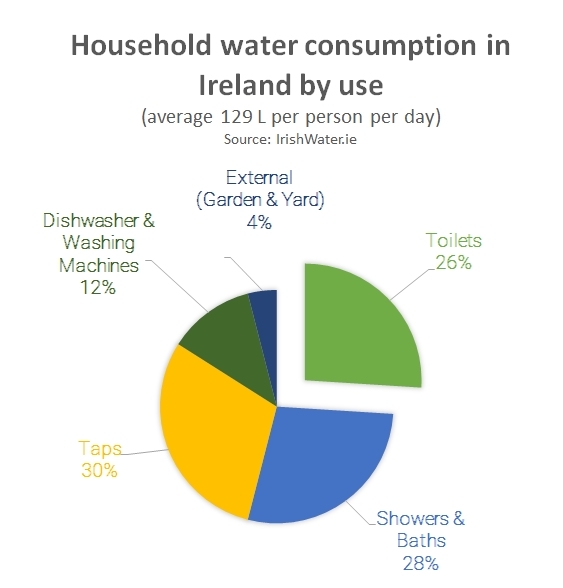 But how you could conserve water using for toilet flushes if the yellow-mellow is not your cup of tea?!

During my research, I also came across an Irish Environmental Protection Agency report titled “Water saving technologies to reduce water consumption and wastewater production in Irish households” written by very talented people I worked with at Trinity College including my PhD supervisor. You can find the link to the report here

You may also enjoy: